Why America’s Abandoned Asylums All Look the Same 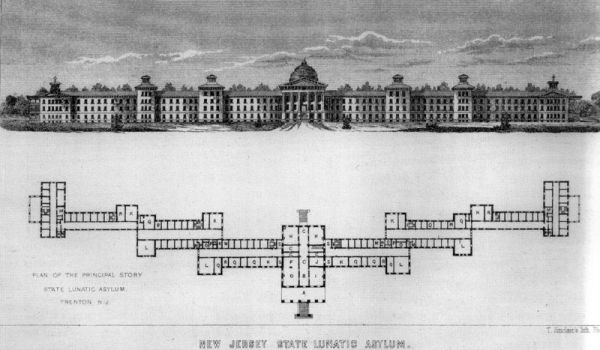 An old abandoned insane asylum always makes for a good horror story setting. The US has more than a hundred abandoned asylums, so it’s a trope we are all familiar with. They have quite a bit in common with each other. First, they are abandoned. Second, these old buildings all look alike. The reason for this was the influence of Pennsylvania doctor Thomas Kirkbride. He advocated for the philosophy that the mentally ill should be treated instead of simply being isolated. It was the moral thing to do.

Kirkbride worked a few years at the Friends Asylum, learning and practicing moral treatment. Then in 1840, he became superintendent of his own asylum, the Philadelphia Hospital for the Insane. It was here that he began thinking about another way to treat insanity. He started thinking a lot about the environment where patients were treated.

As part of a push to get patients out of that prison-like basement, the hospital had already commissioned a brighter, more spacious building in the countryside, but Kirkbride came to believe that even this wasn’t enough. He wanted an asylum designed with treatment in mind. A few years later, Kirkbride was given the opportunity to construct his own facility for the hospital and began to experiment. The architecture of the building, the landscaping of its grounds, the efficiency of its operation — nothing was left to chance. He documented everything he learned in an extremely detailed book called On the Construction, Organization, and General Arrangements of Hospitals for the Insane With Some Remarks on Insanity and Its Treatment.

The asylum designs that came to be known as Kirkbrides were magnificent and quite progressive for their time. Read about the rise and fall of Kirkbride asylums at 99% Invisible. -via Digg

Remote Work Has Its Perks, Until You Want a Promotion

The past five years haven’t been kind to Apple’s laptops. The trouble all began with the butterfly keyboard switch that debuted in 2015. It was an attempt on Apple’s part to slim the MacBook even Read more…

In Dreamfeel’s stunning If Found …, the only way to uncover the story is to erase it. Growth and loss are the same thing, and, through a brilliant trick of interactivity, the player feels the Read more…