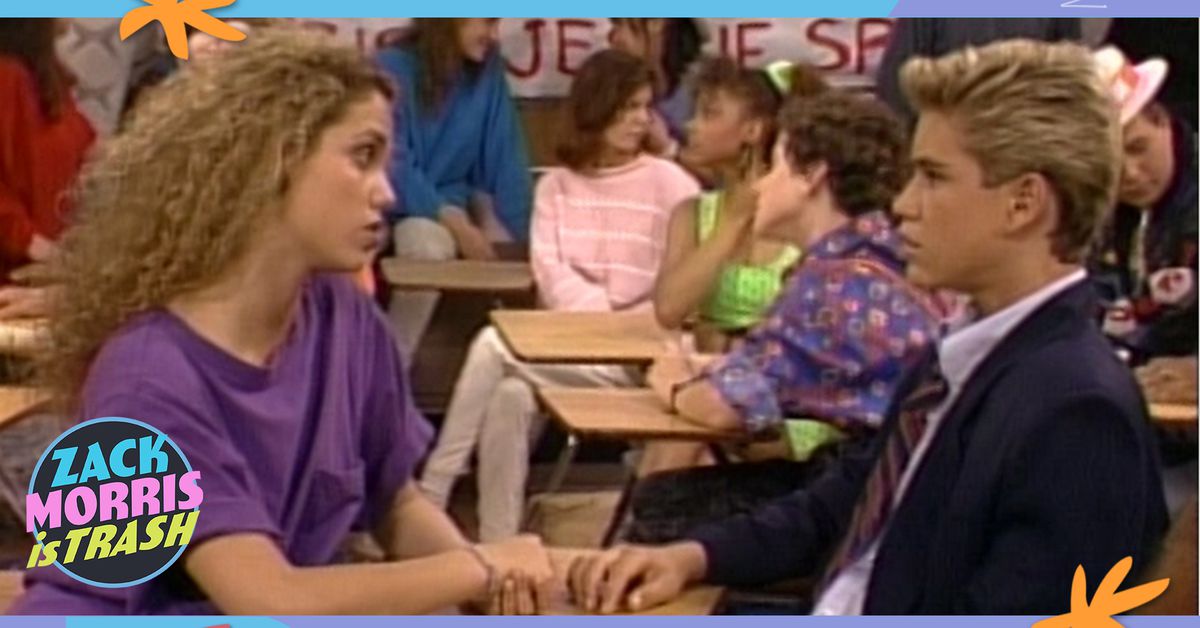 He dismisses her political ambitions as lame. Jessie cares about her peers. Zack, for the second time in one minute, declares he only wants to fuck them.

Jessie’s mom was an activist in the 60’s. She wants to follow in her footsteps. Zack once again calls her dumb.

He complains nothing ever changes, so Jessie encourages him to run instead of just whining. Zack takes this opportunity to fat shame a stranger. (Roseanne meal clip)

Belding reports Bayside got funding to take the next student president on a surprise week-long trip to Washington D.C.! Zack hears free vacation from school and decides to get involved with politics.

Jessie’s the only candidate. Anyone care to compete? Lisa would NEVER backstab her friend. Zack would! Jessie demands an explanation. Zack offers a shit-eating grin instead.

Zack tells Screech about the trip, a secret he should keep secret, and threatens him with violence if he talks. Then sends him to fetch him some D.C. travel brochures.

Zack tries to get Slater’s vote the old fashioned way. (what would the world be like if a woman ran it?) Slater wisely goes with Jessie and speculates on Zack’s evident scheme.

Slater bumps into Screech who drops his brochures and divulges they’re to plan Zack’s raucous romp in our nation’s boring-ass capital pending his certain victory.

Slater tells Belding to have fun in D.C.! Zack’s been blabbing about it. Odd he runs when there’s a vacation! (Zack morris is like a vacuum cleaner. He’ll suck you in if he can!) He certainly sucks.

Zack screens a video that’s straight propaganda. Comparing himself to Lincoln. Blatant lies about knowing celebrities, having sex, and helping others. Praise from foreign leaders. Then goes full Nixon.

Kelly, a genius, was undecided. But after that bullshit she’s voting Jessie.

Belding tells Zack he’s in big trouble running for a vacation. The only way to beat these charges is stay in the race now that the funding fell through. Except Zack’s up in the polls thanks to his many shameless falsehoods. Zack plots to sabotage his fraudulent slander marathon.

Lisa breaks Jessie the hard truth that Zack’s crushing her. He’s making baseless, often contradictory promises to any susceptible group who will listen. Jessie’s ready to do anything to keep him out of office.

At the final debate, Zack announces plans to do away with weekends, extend school hours and triple homework. Enter cool new Jessie! Who is now reduced to peddling the all party, no study nonsense Zack pioneered.

Zack and Jessie are neck and neck! Zack finally shares with Screech he’s trying to lose, so all his hard work was, yet again, pointless.

Jessie’s sad she’s stopped so low and abandoned her values. Zack has no values and hasn’t begun to stoop. He’s paying students quarters to vote for Jessie while spreading nasty rumors about himself.

Jessie, endlessly kind, hopes Zack wasn’t hurt by the many mean murmurings she heard. Kelly felt bad because of those murmurings and voted for Zack. He wins by one vote, forever tarnishing Jessie’s friendship with Kelly.

Belding tells Zack the trip is still on. This was a test. That he failed at failing.

Zack intrudes on a devastated Jessie, who still says she’s happy for him through tears. He now sees being president would’ve meant a lot to her. Something she was crystal clear about from the start. Zack confesses about the trip. But now that permanent emotional damage has been inflicted, he’s going to resign. So all her struggles and anguish were for nothing.

Zack Morris’ oldest friend wanted to better her community through political service. Zack chastised her. Then, when he heard about a free trip, became her sole competition. Then ran on empty promises and propaganda. When he got caught looking for kickbacks, because he sent Screech on a brochure errand, tried to lose but couldn’t do that right and fecklessly shattered a friendship. Then bailed. Because he never wanted a year of additional responsibility. He just wanted a free vacation. But it wasn’t free. It cost those closest to him their time. And values. And tears. Zack Morris is trash.

Taking a driving test is a right of passage. Many of us will remember the daunting feeling of waiting for the examiner to reveal your fate as they counted the tally marks on your test Read more…

Today is a very important day. On the seventeenth of January in 1922, the legendary Betty White was born. The Golden Girls star has been on television for over eighty years, and although she’s been Read more…

If your partner’s snoring regularly stops you from catching those all important hours of sleep, this £10 plant from Morrisons could be your saving grace. For this weekend only Morrisons is selling a pineapple plant Read more…