Festival of Exploding Hammers Ushers in Lent with a Bang

Every February, on the day before Lent, the small Mexican town of San Juan de la Vega honors its namesake saint with a loud tradition that has come to be known as the Festival of Exploding Hammers.

The origins of this bombastic festival are shrouded in mystery. According to one local story, Juan de la Vega, a wealthy miner and rancher, was aided by San Juan Bautista (Saint John the Baptist) to recover gold stolen by bandits and residents came up with the exploding hammers to loudly commemorate their victory over the outlaws. Another story claims that “San Juanito” the patron saint of the town, was an outlaw himself, a sort of Mexican Robin Hood who stole from the rich and gave to the poor, and that the today’s celebration is a reenactment of the fight between San Juanito and the local dons. Whatever the real origin may be, the explosive tradition is so popular in San Juan de la Vega that locals will risk life and limb to keep it going. 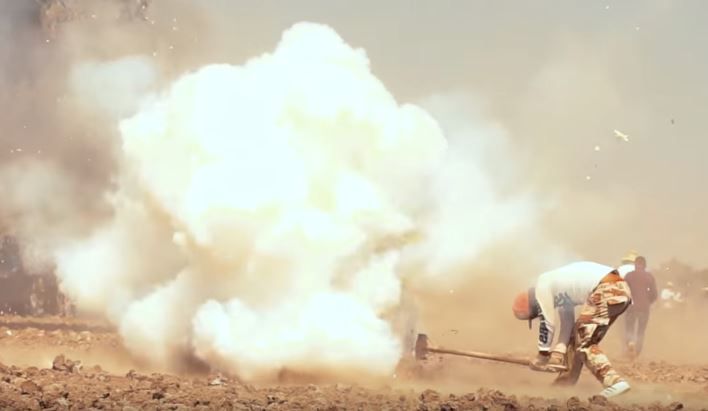 On Fat Tuesday (Mardi Gras) the young boys of San Juan de la Vega head out to a designated place on the edge of town, bringing with them pouches of home-made explosives and long-handled sledgehammers. The explosives are usually a mixture of potassium chlorate and sodium packed tightly so they can then be affixed to the head of a sledgehammer. On the big day of the festival, those brave enough to take part in the celebration will bang their sledgehammers against rail beams causing explosions strong enough to cause serious injuries.

The Festival of Exploding Hammers used to take place in San Juan de la Vega, but years ago authorities finally realized the danger the celebration posed to bystanders and created a special detonation area on the edge of town. It’s still very dangerous to those who take part in it, but at least innocent bystanders are safe. And it’s not like police and other local authorities haven’t tried to band the explosions in the past, but the people of San Juan de la Vega love their tradition too much.

“We do this out of devotion,” one local told WSJ reporters. “You have faith in a saint and you must demonstrate that.”

The problem with the exploding hammers is that the size of the explosives has increased substantially over the years. If in the beginning we had small, thumb-sized packs that only caused a bang and a bit of smoke, today it’s all about who has the bigger bomb attached to their sledgehammer. The blasts are sometimes strong enough to make the sledgehammers fly out of their owners’ hands on impact, and even cause serious injuries.

Hammer wielders regularly get burns on their hands and other parts of their bodies, a few years back a young man got his hand blown up by an explosion, and catching some sort of shrapnel is not uncommon. That said, serious injuries are relatively rare considering that about five tonnes of explosives get detonated every year.

Still, with explosives getting larger every year, the chances of horrific, potentially fatal injuries increases, and many are worried that this competition to cause the loudest bang may soon become the cause of tragedies.

“It’s been going wrong for more than a decade now,” a local man said. “Many of these boys don’t even know why they are blowing things up. They don’t have an idea who the saint is.”